What architecture is this?

Hello, i always use this architecture but i don’t know if this has a name or if its ok to use like this. 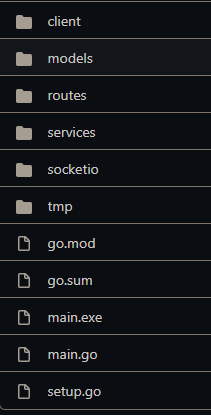 It looks that you’re using the MVC approach in your Go projects (web-projects, I suppose).

In Go world, there are no bad/good/recommended project structures from the Go team, but there is a repository on Github that you can take a look at:

To be honest, you can explore Github and popular Go projects to understand the project structure better and choose one that suits your needs.

yep, every company has your own guide, some thing like this, Uber Guide

golang-standards/project-layout is actually notoriously misleading and not an example of a “standard” project layout at all. See this issue created by rsc. Saying it’s “not an official standard” isn’t quite as accurate as saying it is actively discouraged by the Go team. That said, if you have a project layout that works for you and your team, use it.

The only things I try to adhere to are:

Anyway, OP, your folder structure seems fine. Especially if it works for you. When I scan it, I can get a pretty good idea of what each package does. The only thing that I’m not 100% sure about is tmp, as that could be multiple things. But I’m sure a quick look at it would clear up any questions I had about it.