Hey, we’ve released restic 0.8.0, a fast and secure backup program. The most important changes are:

Head over to the Changelog for more details. You can leave feedback here or in our forum at https://forum.restic.net, for bugs please create a new issue on GitHub. Thanks!

I’ve been using Restic 0.7.3 for a while and actually wanted to ask what happens when a snapshot file is removed in time. See, I’ve been trying to automatically synchronize the whole backup folder using Google Drive and it keeps telling me that a file has been removed (I guess locally), and asks What do you want to do? Remove or restore it. As I don’t understand how these files live their lives, I’m puzzled what choice to make, so I keep choosing Remove.

I’d love to hear some details so I know in the future whether it is safe to choose Remove or it doesn’t really matter if I by mistake choose to Restore. Will it ruin the local backup or not?

Thank you for your work on Restic

Basically, the files in a restic repo are “write-only”, which means that whenever there’s new data to be written, a new file is created. Files are never changed. The other side is that whenever you run restic forget and restic prune, it’ll reorganize the files, delete old ones and create new ones. So in your case I guess that you ran restic forget locally, so some files in the snapshots folder were removed. That’s normal and expected. When you run restic prune, it’ll also remove files in the data and index folders.

So, overall if you run forget and prune locally, removed files are normal and to be expected, the right option here seems to be “Remove”.

I actually don’t do any prune. May be in time snapshot files in the repo become reused? This is how it looks in Google Drive: 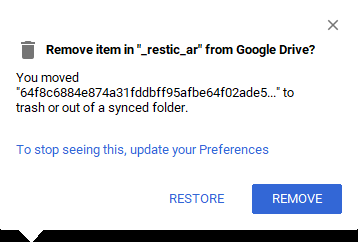 When you don’t run prune, the only directory that sees files removed is the locks directory. Can you check the next time it pops up if the file comes from that directory? For lock files, you can click “Remove” in that dialogue.

Yes, I just encountered it again and dug into Google Drive folder online and found that it was under locks folder