I am maintaing the code for a Go project that reads and writes a lot of data and that has done so successfully for some time. Recently, I made a change: a CSV file with about 2 million records is loaded in a map with struct values at the beginning of the program. This map is only used in part B, but first part A is executed. And this first part already runs noticeably slower than before (processing time is quadrupled). That is very strange since that part of the logic did not change.
I have spent a week trying to explain how this can happen. Here are the steps I have taken (when I mention performance, I always refer to part A, which does not include the time to load the data in memory and actually has nothing to do with it):

Here I have plotted the metrics (time spent per batch of operations in part A) with and without the data in memory: 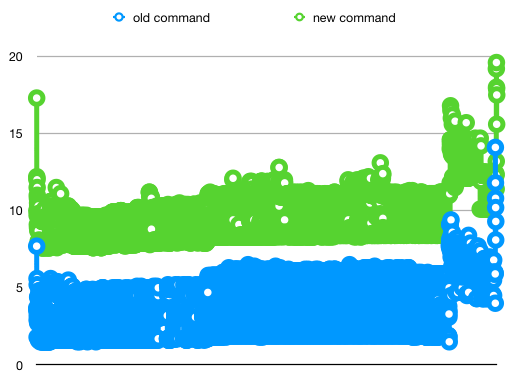 This issue is really puzzling me. Can your code run significantly slower just because more memory is occupied, even when there is a lot of memory available? If not, what can I do to find the cause of the issue?

Eventually I also posted this question on StackOverflow, where it was answered: the garbage collector kicks in often due to the high memory load (even though it has nothing to do) and accesses the data.
(I cannot delete this topic.)