If you run my Go program

With “go build main.go”, do you get the same errors I do ?

Cobra is a powerful command line package for Golang. - paulgureghian/Go_Package_Cobra 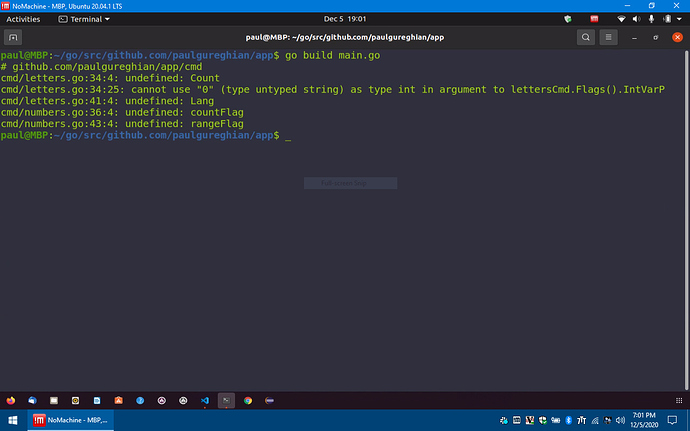 The error message tells you: You cannot use "0" as an int line 34 of letters.go:

If you check the documentation of IntVarP, it says the 4th parameter has to be an int. Instead of using "0", use just 0.

Yeah, I was able to figure that one out and it’s been fixed.

I can’t figure out why the other variables are not defined ?

Yup. I was trying to reproduce this tutorial.
Did I miss something ?

I think the tutorial has typos in it. Where it talks about the verbose flag, it essentially says:

And this part makes sense to me: You have a verbose variable and BoolVarP references that variable.

The letters, numbers and count flags don’t match up, though:

The actual variable names are countFlagLetters and langFlagLetters, but the code in init is looking for Count and Lang.

Yup. I see it now. that should be the fix.