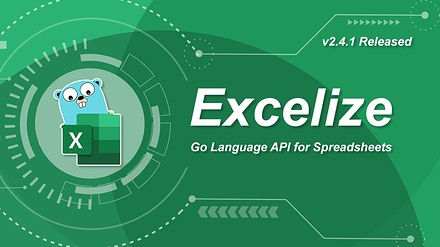 Excelize is a library written in pure Go providing a set of functions that allow you to write to and read from XLSX / XLSM / XLTM files. Supports reading and writing spreadsheet documents generated by Microsoft Excel™ 2007 and later. Supports complex components by high compatibility, and provided streaming API for generating or reading data from a worksheet with huge amounts of data.

We are pleased to announce the release of version 2.4.1. Featured are a handful of new areas of functionality and numerous bug fixes.

The most notable changes in this release are:

I’m using Excelize on a project and it’s great. Glad to see you’re on the forum as well.

Just started using it today! I have a project that takes a JSON description of a database schema and can emit models in a few languages from that schema. I wanted to add support for a 3rd party application that uses Excel spreadsheets to define its schemas, so I used Excelize to generate the files in the right format.

It was very easy to use; I got it right my first try which is more than I can say for the first time I tried using the OpenXML SDK! Starred in GitHub!

Yeah - I’ve always found it mildly funny that the OpenXML SDK is made by Microsoft and it’s one of the worst libraries for working with XLSX. It’s fast, but man is it a pain to get your output perfect. EPPlus is OK but at the time I was working on the project where I used OpenXML, EPPlus didn’t support .NET Core so it was a nonstarter.