I am not sure how to interpret the following memory profile output. I think I am fundamentally misunderstanding something about it.

The output shown is gotten using the “-base” option when viewing profiles. (inuse_space)
//note : The garbage collector is forced to run before taking a memory profile.

After investigation, I see the goroutine that handled the device has a cumulative allocated size of 15kb.

Since the goroutine has been exited, this means that the data allocated (in this routine) on the heap must still be referenced somewhere. Otherwise, the garbage collector would have cleared it. (Looking for confirmation on this way of thinking).

Now taking a look at the lowest level of my code that was called by the goroutine, I see 14.62kb cumulative allocated by the json.Marshall function. 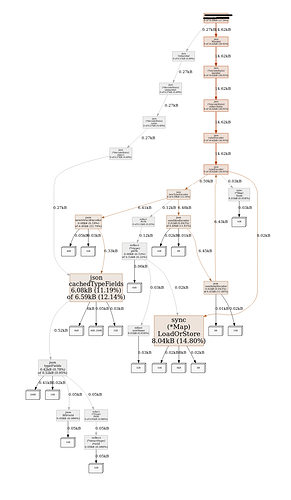 This means that somewhere down the line, the json.Marshal() function stores some information on the heap that is still referenced after, the calling routine calling has been closed. (Looking for confirmation here to.)

Looking at the code I couldn’t immediately find something that would create a reference to the kvPairExportJsonResult. After which I decided to some testing.

The real confusion starts when I turned this around.

Huh? Strange… Maybe because of compiler optimizations.
So I turned it off and tested again with an extra variable again.

I do not understand the behavior shown in the last 2 examples.
It even invalidates both my assumptions, and make me question my understanding on how these things work.

How can a variable that’s never used after a print still be used as a reference somewhere ?
How can a variable actually have “cumulative” but not a flat allocation? Hell why does it still have the exact amount as before? (14.62kb)
Why isn’t the last line in the last example showing allocation but the very first (and second example) is ?

I’m a bit lost with these results, I’m not sure If I can trust em.
I gladly accept any help.